GammaDrone project is part of CNR "AMICO" Program, funded by the "Proof of Concept (POC)" call of the Italian Ministry of Economic Development and managed by the "Agenzia Nazionale per l'attrazione degli investimenti e lo sviluppo d'impresa S.p.A." (Invitalia).

The goal of POC call is to support the increase of the Technology Readiness Level (TRL) of inventions patented by research institutions, so that these inventions can be further developed, especially by the industrial system, and possibly reach the market.

The technology that we want to improve, patented by CNR and University of Parma, is referred to a special driving technique of an unmanned vehicle (drone) and its detection system for polluting substances. The sensor, mounted on the vehicle, sends a signal to the control station and its intensity becomes higher and higher while approaching the polluting substance. A dedicated software converts this signal into a force-feedback on the driving joystick, so that the driver is helped by the attractive force to quickly lead the vehicle towards the source. 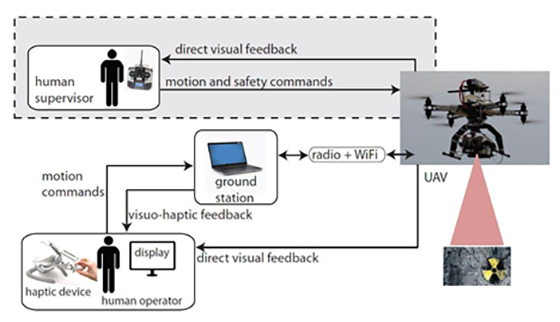 This system has been successfully demonstrated using a UAV equipped with a gamma-ray spectrometer to detect and identify nuclear material released into the environment. The haptic drive technology has been widely tested in simulated experiments, lab experiments and also real environments.

The prototype we previously realized was equipped with a small detector, mainly useful to demonstrate the technology operativity (TRL=4), but often not sufficient to be employed in real applications. In order to make this system more appealing for the industry, it is necessary to: