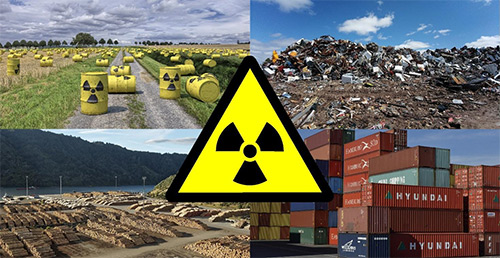 IMEM has a decade of experience in radiation detectors, in particular CdZnTe (CZT) based systems. In respect to other radiation sensitive materials, CZT enables single photon counting (spectroscopic detection) and room temperature operation. Furthermore, thanks to its high stopping power, it is able to be sensitive to high energy radiation up to few MeV (i.e. in region of interest of gamma and cosmic radiation). For these reasons, CZT is the best candidate for the realization of light weight, robust and gamma-ray sensitive detectors which can be installed directly on Unmanned Aerial Vehicles (UAVs) for civil and military uses or on satellites for the deep space investigation.
Furthermore, the possibility to make spectroscopic detection of photons makes this material reliable for non-destructive tests like in-line scanner or imagers.

Standard environmental monitoring systems are based on Geiger Mueller counters. These equipments are only able to measure the number of photons that interacts with them but not allow to gather information about the nature of the contamination and the position of gamma ray source.
The new generation of X and gamma ray detection systems should satisfy the following requirements:

In fact, monitoring station can not be equipped with a cryo-cooled system: the detector must work at room temperature and shall be able to measure the energy of incoming photons. Furthermore, remote stations are commonly powered by means of solar energy, then power consumption of the entire system must be limited as much as possible.

The material that best fits all these features is certainly CZT. IMEM, thanks to a project funded by Cariparma Foundation, realized an environmental station based on a CZT detector. A custom low power analog readout electronics was realized in collaboration with the physics department of UNIPR and connected to a large coplanar CZT detector. Coplanar geometry is based on a full area cathode contact and two interdigitated grids of stripes: one of them is the collecting electrode and the other is the drifting electrode (carriers are drifted by means of a little difference of bias voltage). This geometry allows to increase energy resolution by reproducing the so called "small pixel effect".

In the case of a nuclear accident or a terrorist attack involving nuclear material, the direct examination of the contaminated area by an human operator may not be possible due to the presence of hazardous materials. Also, the presence of nuclear or radiological material was sometimes reported in illegal waste disposals, in highly contaminated dismissed industrial area, or in wood or iron stocking plants.

In all these safety and security issues, the use of a remotely-controlled vehicle for the detection and identification of nuclear or radiological material would be highly recommended in order to preserve the safety of the human operators, as well as to reduce the risk of scene contamination.

IMEM, in collaboration with RimLab (engineering group of Parma University), has developed a novel instrument based on the interconnection between an Unmanned Aerial Vehicle (UAV) and a CZT based gamma detection system. The prototype was equipped with four 5x5x20mm3 drift stripes detectors and it can be remotely controlled thanks a force feedback system able to drive the operator toward the radiation source (in this paper the prototype is detailed). The current detector version is based on a monolithic CZT quasi-hemispherical detector (shown in the figure below) which allows a single readout channel while preserving a high energy resolution. Focused electric field of quasi-hemispherical detector ensures high sensitivity and great spectroscopic performances.

A few demo video of the drone in action can be found in the page of the X-drone project.

Typical performances of a CZT detectors in operative condition of quasi-hemispherical detector are shown in the following figures. 57Co and 137Cs nuclear sources were tested. Measures were carried out in collaboration with Due2Lab company

As said before, CZT combined with state-of-art electronic system allow to realize very lightweight and compact device. Actual technology enables the fabrication of gamma detection device that weighs few tens of grams and are smaller than a smartphone (to which, by the way, can be easily plugged) and able to detectdetect and recognize also weak nuclear sources. 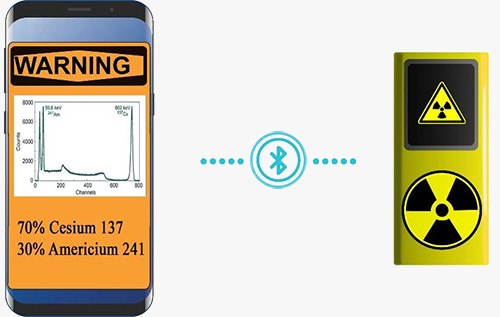 First responders (firefighters, rescue service, police, etc) could use these instrumentations in case of a radiological terrorist attack or nuclear accident.