Some classes of magnetic materials show a strong interplay between magnetic, electrical, elastic, thermal properties giving rise to a multifunctional behaviour. Their main properties can be controlled by external stimuli (i.e., magnetic/electrical field, pressure and stress, temperature) and their combined application.

Among them, magnetic shape memory Heuslers, are an important class of multiferroic materials (ferromagnetic and ferroelastic) for smart applications and energy conversion, e.g., solid-state cooling and energy harvesting, arising from their "giant" thermo/magnetomechanical and magneto/elastocaloric properties. 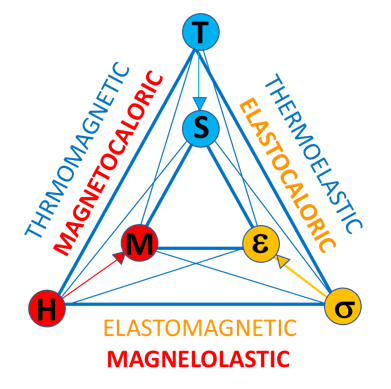 Our research is devoted to:

The most representative class are Magnetic Shape Memory Heusler compounds (e.g. NiMnGa-based compounds). They are ferromagnetic and show a martensitic structural transformation from a high T austenitic cubic phase to a low T martensitic lower-symmetry phase. Our researches are devoted to the study the structural, magnetic, and functional properties at the different-length scales in bulk materials, thin films, and nanostructures. 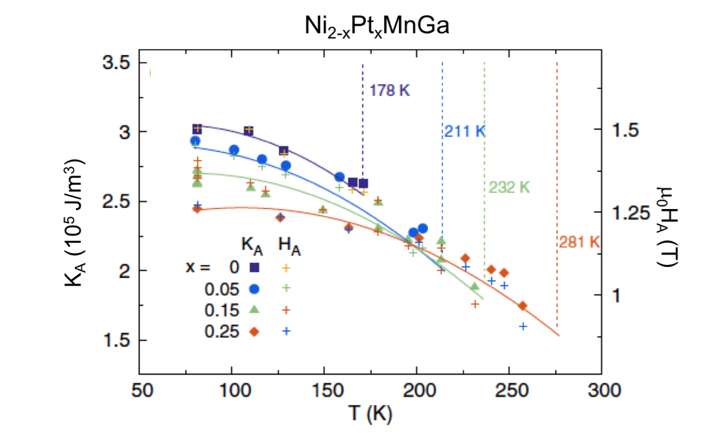 Anisotropy constant (KA) and anisotropy field (HA) as a function of temperature for polycrystalline Ni2−xPtxMnGa (0 <x<0.25) alloys. The vertical dashed lines correspond to the temperatures where the martensite to austenite transition starts on heating. Solid lines are guides to the eye used to show the variation.
From: https://doi.org/10.1103/PhysRevB.96.054105

Magnetic shape memory thin films have a great potential for their possible integration in micro/nanosystems for the fabrication of new-concept devices such as actuators, valves, energy harvesters, solid-state microrefrigerators, etc. In addition, the intimate link between magnetic and structural degrees of freedom and the peculiar hierarchical twin-within-twin martensitic structure makes epitaxial films a unique platform for the precise control of structure and magnetism from the atomic to the macro-scale. On-substrate and free standing micro/nanostructures are a vast and still almost unexplored world that pave the way to the emergence of new phenomena and new-concept applications. 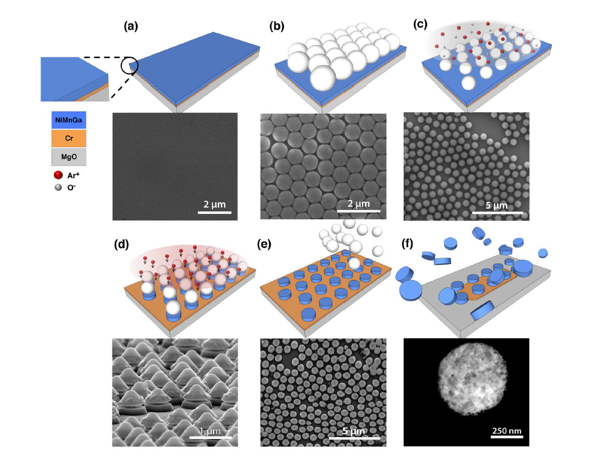 Scheme of the multi-step nanofabrication process by nanosphere lithography (@INRIM Laboratories) together with corresponding SEM images at a) Continuous 75 nm thick NiMnGa film deposited on a 50 nm thick Cr buffer layer grown onto MgO(001). b) Self-assembled monolayer of polystyrene spheres deposited onto the surface of the continuous thin film. c) plasma etching i to reduce polymeric spheres diameter. d) The NiMnGa film is patterned by Ar+ sputter-etching that selectively removes the material not covered by the polymeric spheres. e) The spheres are removed from by ultra-sonication. f) The disks are detached from the substrate by a selective wet-etching of the Cr underlayer, obtaining an aqueous suspension of NiMnGa nanodisks.

Magnetocaloric materials show pronounced changes of temperature when exposed to a fast variation of an applied magnetic field. This effect is maximum in the vicinity of magnetic and magnetostructural phase transitions, where strong magnetization discontinuities are realized.
The magnetocaloric effect is the physical phenomenon exploited in magnetic refrigeration – a promising, low carbon technology that has been actively studied as an alternative to present-day refrigeration machines still based on the compression cycles of refrigerant gasses that are tainted by their non-negligible global warming potential.
In addition, the converse of the magnetocaloric effect, i.e., the change of magnetic induction induced by temperature variations, is  promising for developing a new class of innovative electrical energy generators based on wasted or renewable sources such as waste heat or geothermal heat.

The strong interplay between structural, magnetic and thermal degrees of freedom in NiMn- based Heusler compounds can be fruitfully guided by composition. For instance, magnetic and magnetostructural critical temperatures as well as type of magnetic ordering of the low and high temperature phases in the vicinity of the transformation can be adjusted to increase the magnetization and the volume discontinuities across the martensitic transformation, substantially enhancing the magneto- baro- and elastocaloric response in these alloys. These results can be achieved by composition control, i.e. both by adjusting the relative quantities of the constituents, and by introducing substitutional elements toward quaternary and quinary compositions.
By this methods we have designed magnetostructural phase diagrams of NiMnGa compounds by Co and In doping, we have studied the connections between the magnetocaloric effect, its reversibility, the role of hysteresis and sharpness of the transition, connecting them to the magnetic and structural discontinuities at the martensitic transformation. 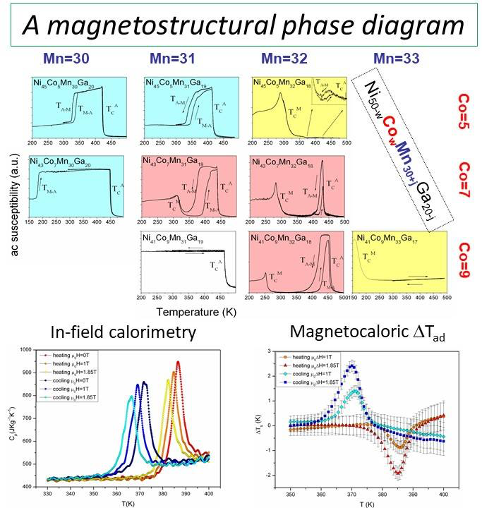 Effects of Co and In addition to Ni2MnGa as seen by a.c. susceptibility measurements versus temperature: it is possible to tune the magnetic and magnetostructural critical temperatures to tune the transformation across phases with different magnetic states, change from direct to inverse magnetocaloric effect, improve the magnetostructural discontinuities at the transformation. Magnetic field dependent calorimetry and temperature measurements allow to characterize the magnetocaloric response of the materials.

Besides strong magnetic discontinuities at the martensitic transformation, Heusler compounds also show a volume discontinuity which can be increased to considerable values by composition.
This feature allows for actuation of the transformation by multiple stimuli other than magnetic field, such as pressure and mechanical stress, leading to giant barocaloric and elastocaloric effects, and ultimately to multicaloric cycles where both magnetic and mechanical stimuli can be employed. Their proper application would also allow for an operative reduction of the transformation hysteresis, a fundamental feature for the deployment of solid state refrigeration. 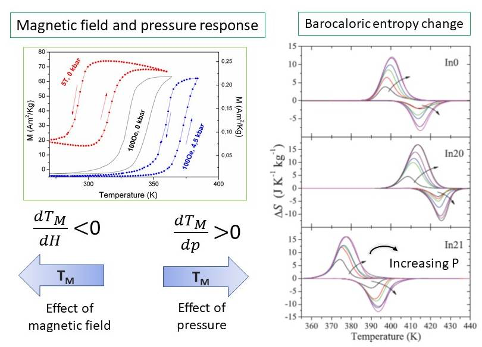 Left: Effects of pressure and magnetic field on the magnetostructural critical temperature. It is possible to affect the transformation depending on the applied stimulus. Right: Barocaloric entropy changed measured at different applied pressures on (Ni,Co)2Mn(Ga,In) compounds.

We study the functional properties of magnetocaloric materials by the perspective of their possible application: strategies to extend the magnetocaloric temperature range via compositional grading; synthesis protocols suitable for scaling up the production of Heusler compounds up to the Kg scale; new magnetocaloric cycles by combining, extrinsically or intrinsically, materials with both direct and inverse magnetocaloric effect.