Most of metal oxides are functional materials with chemical and physical properties that are useful and interesting for different kinds of application.
When they are obtained in form of bi- or mono-dimensional nanostructures, new and peculiar properties add up to the traditional ones, thanks to the high surface/volume ratio, the increased surface reactivity, the impact of their size on the electrical and heat transport, the occurrence of quantum effects.
Many of these properties can also be controlled, and sometimes “tuned as desired”, through the modification of their size, their “doping level” or the coupling with other nanostructures.

IMEM has been working on the synthesis and the study of these nanostructures for almost 20 years, with the goal to use exploit them in different fields, such as gas and volatile organics sensing, photo-catalysis for pollutants reduction, biomedical diagnostics, photovoltaics, optoelectronics and fundamental physics study.

Here below you can find a few more information about:

ZnO nanotetrapods and other nanostructures

Zinc oxide (ZnO) is one of the so called “multifunctional” materials, owing several chemical and physical properties that can be exploited (sometimes even simultaneously) to play different “functions” (semiconductor, piezoelectric, chemoreristor, UV emitter, transparent conductor, etc).
This great versatility, when combined with the large number of possible nanostructures that are available for this material, makes ZnO an extraordinary tool to create new kind of devices. 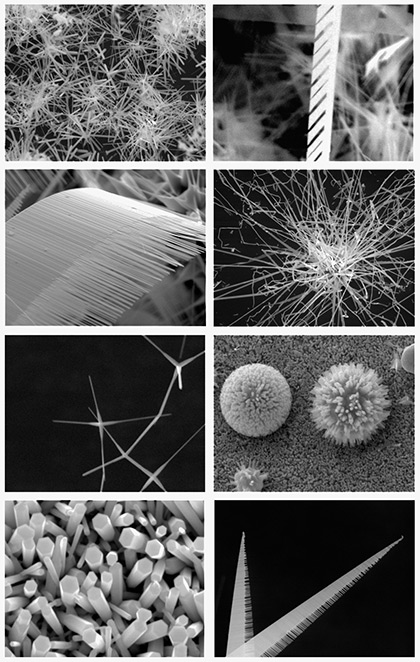 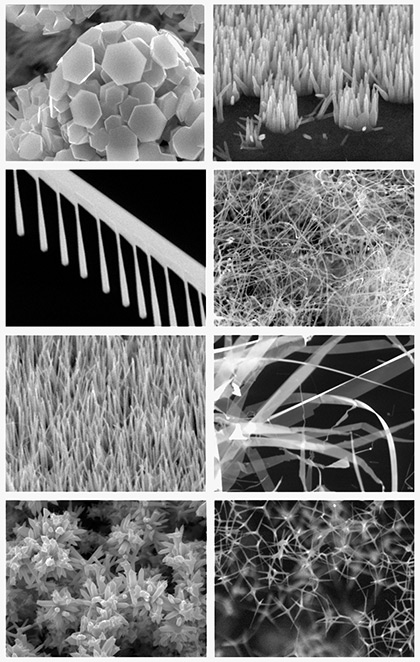 Thanks to a vapour phase synthesis process, where the reaction of oxygen and metallic Zn vapour occurred together with the right nucleation conditions, it has been possible to create a large number of ZnO nanostructures with different morphologies. In particular, this process was optimized to produce homogeneously three of these nanostructures, with no other kind of morphology: nanowires, nanorods and nanotetrapods.
Nanotetrapods, that can be produced in large amounts, have been widely employed to make gas sensor devices.
Nanorods, instead, can be grown also by a solution based chemical process at much lower temperature (<110°C). This process is affected by lower purity, if compared to the vapour phase one, but allowed us to homogenously coat very wide areas with ZnO nanorods.

Modification of nanostructure properties by coupling with other nanomaterials

The noteworthy properties of metal oxide nanostructures can be further extended if they are combined with those of other nanomaterials, coupled on the surface. In this way it is possible to add new properties to the nanostructured oxides (for example magnetic properties, visible light adsorption, catalysed reactivity with specific chemical compounds) or modify the existing ones.

This principle has been applied manly to ZnO nanostructures in order to obtain, for example, a photo-catayst to remove pollution from water and can be recollected by a magnet thanks to the addition of magnetic nanoparticles.

In a similar way, the optimization of different coupling techniques led to the fabrication of ibrid photovoltaic cells, substrates for SERS analysis of cells and other organic compounds, gas sensors with higher selectivity towards specific compounds.

Integration of ZnO nanostructures in conventional materials to make them “smart”

ZnO nanorods were deposited on different conventional materials, such as carbon fibers, textile fibers, or metal wires, thanks to a solution-based chemical synthesis that allowed the nanostructures to grow at relatively low temperature.

This kind of process is the base for the nanotechnology we developed to integrate different devices in conventional materials to make them “smart”.
For example, the addition of ZnO nanorods on carbon fibers allowed us to create “smart” composite materials that are able to measure the strass/strain or vibration the are subject to.