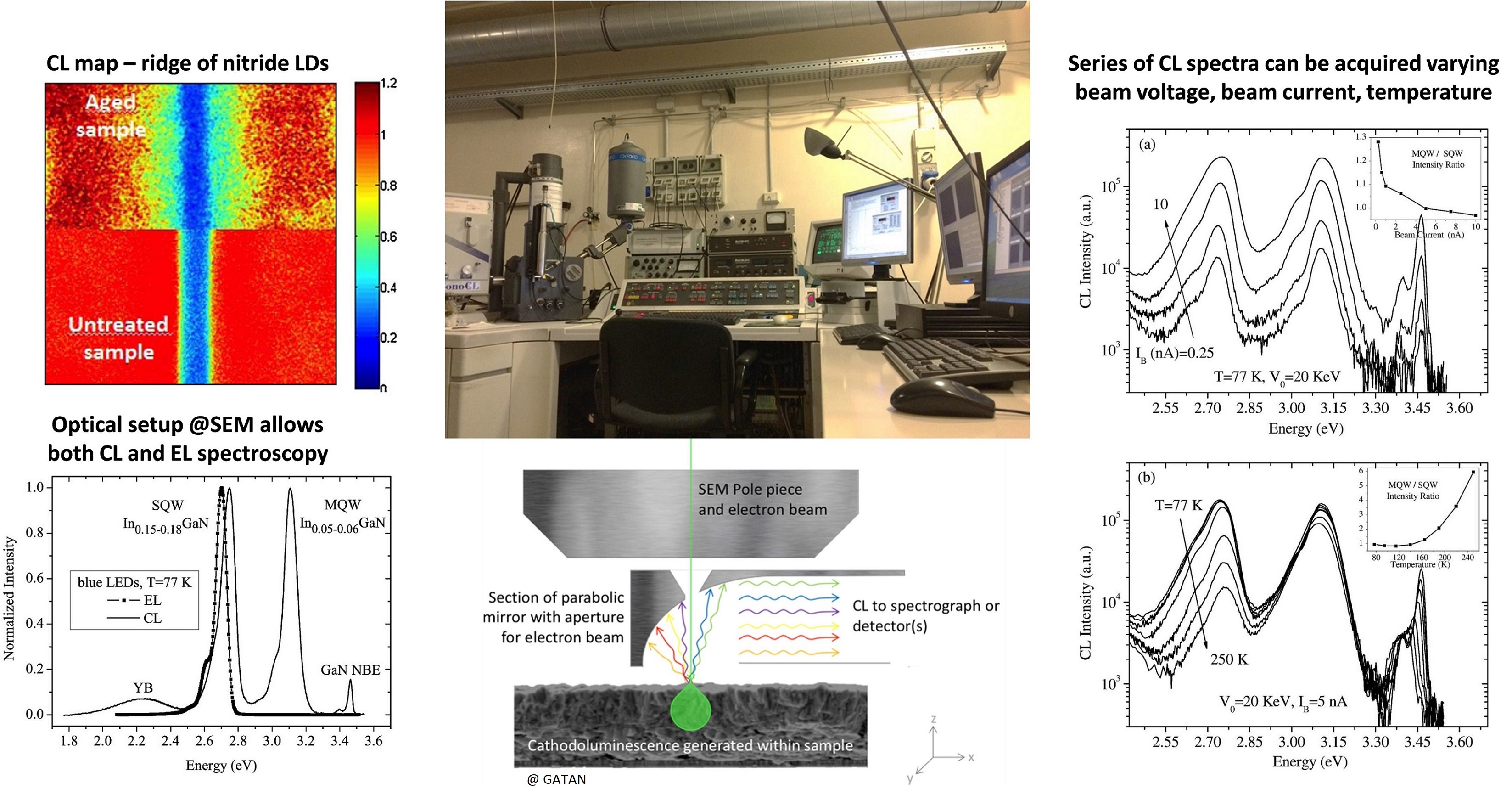 Cathodoluminescence is a technique based on the collection, spectral analysis and spatial mapping of optical radiation emitted by solid materials following interaction with the electronic beam of a SEM. The analysis can be made by varying the electron beam parameters - i.e. acceleration voltage, beam current, spot mode or raster at different speeds - and the sample temperature. To study radiation effects, time-dependent acquisitions at a fixed wavelength are possible. IMEM researchers have consolidated experience in the application of this methodology to semiconductor and oxide materials and devices (LEDs, lasers, HEMTs, solar cells), also in their nanostructured state. It is also possible, in the SEM chamber, to apply a voltage or an electric current to the sample, thus operating in electroluminescence mode.

X-ray excited optical luminescence is a photon in - photon out technique where an X-ray beam (photon in) impinging on a system induces an optical photon emission process (photon out). The X-ray energy absorbed by the system often generates multi-step cascade processes such as secondary electron generation, intragap excitation, and other physical processes such as photoemission and absorption involving deep core levels. XEOL in combination with XANES/NEXAFS is often used to reveal the electronic structure and optical properties of a system with high site-specificity.

XEOL analysis can be performed also in time domain if a pulsed X-ray source (typically synchrotron radiation) is used. The intrinsic time structure of the photon bunch allows to study the decay dynamics of a system and to identify optical multi de-excitation pathways. Using XEOL in time domain it is possible to investigate energy transfer processes between two systems that interact with each other (e.g., inorganic-organic hybrid systems). XEOL performed in time domain are usually called time-resolved X-ray excited optical luminescence.

IMEM researchers developed a profound knowledge about the use of XEOL to investigate nanostructured systems and absorber-emitter complexes for biomedical and bioelectronic applications. An apparatus for XEOL measurements operating in ultra-high vacuum (UHV) is available at the IMEM unit in Trento. In strong collaboration with researchers working at the ELETTRA synchrotron facility in Triest, IMEM researchers  developed a measurement setup for XEOL operating in an energy range from 0.05 to 21 KeV.

Ellipsometry is an optical technique that allows to reveal the variation of the polarization state of a beam of polarized light, produced by interaction with a linear optical element, for example by reflection with non-normal incidence by a reflective surface. This allows you to characterize a thin film, providing the values ​​of the refractive index n, the extinction coefficient k and thickness t. Since only the variation of the polarization state between incident and reflected waves is measured, the measurement is independent of the intensity I of the beam (and therefore of any fluctuations-variations of I) allowing a highly precise measurement.

The advantages of ellipsometry are:
- It is a non-destructive technique
- No special sample preparation required (suitable for in situ measurements)
- Fast and easy to use
- A reference measurement is not necessary
- Direct and accurate determination of the optical constants n and k

Use at IMEM: determination of the growth process and of the optical properties of organic materials (e.g. pentacene, phthalocyanines, SAM, mixed picene/pentacene) and inorganic semiconductors (TiO2, ZnO, MoS2).